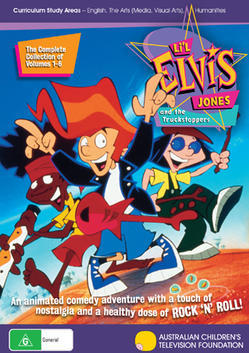 An Australian animated series starring Little Elvis Jones, a child prodigy guitarist and singer, and his two best friends living in a small Outback town. Lil' Elvis was dropped in a guitar case on the doorstop of a Happily Married couple of Elvis Presley fanatics running a truckstop, who looked out and saw a Cadillac vanishing into the night. Now he and his friends play in a band, and contend with the Corrupt Corporate Executive W.C. Moore, who practically controls the town and is in a ruthless search for more of the mysterious mineral known as Berkonium.

Despite the fairly typical cartoon presentation, the show had an ongoing plot concerning W.C. Moore's search for Berkonium and attempts to completely control the town and the Truckstoppers, while the kids deal with the trials of growing up in a small town in the Australian outback.

Tropes evident in this series include: