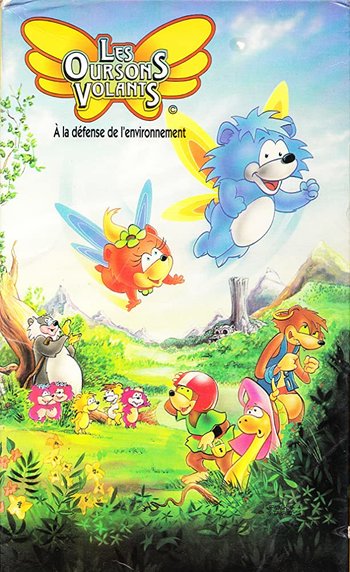 The Little Flying Bears (Croatian: Leteći medvjedići) is an animated television series produced by Zagreb Film and CinéGroupe. It was a Croatian/Canadian co-production which originally aired in 1990.

The cartoon series centers on the adventures of a rare species of winged flying bears living harmoniously with nature in a magical forest. Living in a cooperative community headed by the wise mentor figure of Plato, an elder flying bear, the bears along with various forest animals defend their home from pollution and exploitation. Their main adversaries are Skulk and Sammy - two weasels motivated by greed who often cause harm to the forest though sometimes the bears need to find a way to prevent a more serious threat - that by the manimals (humans).

This cartoon helps children realize the importance of protecting the environment. The series shows the harmful effects of pollution and fires, as well as the important role of the ecosystem.