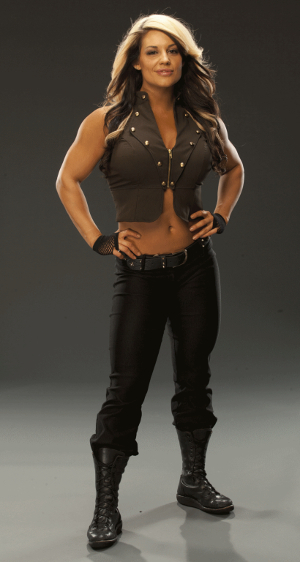 Celeste Beryl Bonin (born October 7, 1986) is an American former model and bodybuilder, but most famously a professional wrestler, who worked for WWE as Kaitlyn. She was a contestant on the third (but first all-female) season of WWE NXT which she won. She's a one time WWE Divas Champion.

In January 2014, she left the WWE and temporarily retired to focus on her clothing business and marriage.
Advertisement:

In December 2017, Coastal Championship Wrestling announced that Bonin was no longer retired, and on February 10, 2018, she returned to in-ring action under her real name.

In July 2018, Kaitlyn participated in the second Mae Young Classic.

Tropes associated with Kaitlyn include: