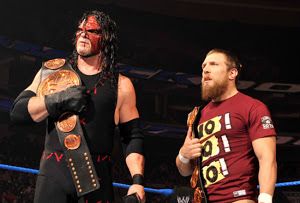 A moment when they actually got along
Advertisement:

Team Hell No was a Tag Team that consisted of Daniel Bryan and Kane from September 10th, 2012 until July 29th 2013. The team was forced together when then General Manager AJ Lee ordered them into anger management classes, and later putting them in a match to become the number one contenders for the Tag Team Title, which they won at the 2012 Night of Champions PPV. After they lost the titles, they decided they wanted to pursue singles gold (the WWE Championship), and split as a team.

Quite unexpectedly, after Daniel Bryan's return to active competition in 2018, Team Hell No reunited again on the 27th of June episode of SmackDown.

I am the Tag Team Tropes!

No! I am the Tag Team Champions!