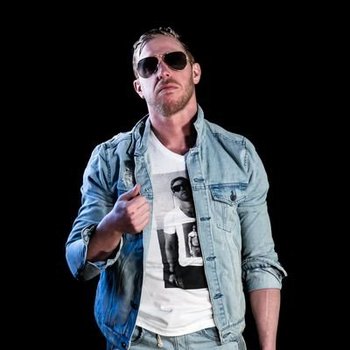 Seen here at his most enthusiastic.
"…"
Advertisement:

Hailing from... wherever and weighing... whatever, this is "Freshly Squeezed" Orange Cassidy. Describe him here.

Orange Cassidy (real name James Cipperly, born in May 4, 1984) is an American professional wrestler currently working for All Elite Wrestling after a very long career in the indies, particularly with the now-defunct CHIKARA promotion as part of the ever-popular ant-masked stable The Colony as Fire Ant. But he only really made it big as a indie sensation under the name of Orange Cassidy, for his truly unique style of wrestling: Sloth Style.

The general concept of Orange Cassidy (and his Sloth Style) is very simply that he's an almost supernaturally detached, lethargic slacker (both physically and in personality) living in the incredibly intense and athletic world of Professional Wrestling and being almost fervently dedicated to his detached laziness outside of the ring as well as inside it (such as executing maneuvers with his hands inside his pockets, which is actually a lot more difficult than just doing them normally). However, much like a Sloth's slowness hides its razor-sharp claws and fast swimming speed, Cassidy's incredibly slow and telegraphed lazy moves hide an incredibly athletic edge that he shows just when his foe (and the crowd) least expects it. You never quite know what to expect when you're watching (and wrestling) "Freshly Squeezed" Orange Cassidy, the King of Sloth Style.

Orange Cassidy made his way to nascent promotion All Elite Wrestling in 2019, becoming one of the promotions breakout stars for his truly one-of-a-kind style and character, having a particularly strong fanbase with the younger crowd.

Without a doubt one of the most passionate, energetic, and enthusiastic professional wrestlers going in the modern era, Cassidy is a chilled out fellow who just so happens to be one of the best wrestlers on planet earth... when he cares to be.