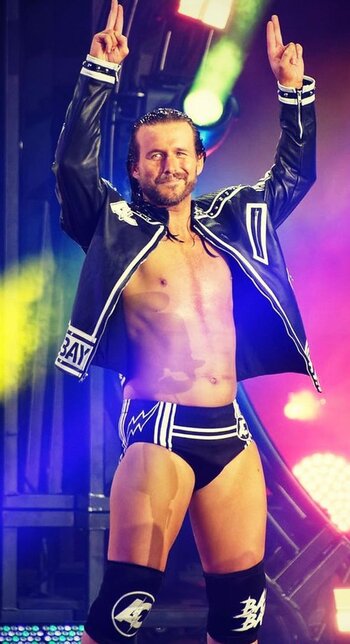 You know it's all about tha BOOM!

Austin Jenkins (born July 5, 1989) is a professional wrestler and actor best known for his years in Ring of Honor and Pro Wrestling Guerilla, and WWE's developmental brand NXT, currently signed with All Elite Wrestling. He has also worked other promotions such as Combat Zone Wrestling and New Japan Pro-Wrestling.

You probably don't know anything about Austin Jenkins from Lancaster, PA, though, so let's just go with the guy you do know. A playboy from Panama City, Florida who goes by ADAM COLE, BAY-BAY!

Officially beginning his training in November 2007 while still a senior in high school and having his debut match for CZW on June 21, 2008, Adam Cole spent the first two years of his career as a fresh upstart face balancing a tag team with Tyler Veritas and a singles career before winning his first title, the CZW World Junior Heavyweight Championship, on May 8, 2010. A few months later he turned heel as the champion by attacking Veritas, followed in the upcoming months by gaining a new valet and onscreen girlfriend in Mia Yim (later known as Jade in TNA), then by aligning himself with his trainer and company owner DJ Hyde, who both helped him retain the championship for 553 days, the longest reign in the title's history. During this time he also developed an intense rivalry with Sami Callihan.

His time with ROH started around 2009 in dark matches and jobber appearances before officially signing on in 2010 and forming a tag team called Future Shock with fellow ROH newcomer Kyle O'Reilly. The team continued on in both ROH and PWG, debuting in the latter in 2011, before breaking up in both companies in 2012 (ROH in January, PWG by September, during which his heel "Panama City Playboy" persona was first reintroduced), both Future Shock and the American Wolves found themselves at odds from their partners at the start of 2012, with Cole siding with Eddie Edwards against O'Reilly and Davey Richards. After beating both O'Reilly and then-World Champion Richards in critical matches, he went on to win his first ROH World Television Championship from Roderick Strong in June 2012. Losing the title in March 2013 to Matt Taven, he later surfaced higher in a tournament for the ROH World Championship after the title was vacated by Jay Briscoe. Cole won the tournament to become champion with the final match going against Michael Elgin, then attacked both Elgin and former champion Briscoe.

From that day forward, the venerable young star had become the incarnation we know him as today, which most of the tropes below are based on; the arrogant, self-worshiping, manipulative villain who would do anything to stay at the top of the game, amassing factions and alliances with other wrestlers to aid in his rise to glory while establishing his own personality and talent as the dominant factor. Over the course of the next few years, this path made him the leader to Maria Kanellis's Kingdom, the fourth-in-command of the Bullet Club, the founder of the Mount Rushmore of Wrestling, the first ever 3-time ROH World Champion (as well as the first to ever win said title at a non-ROH event), the longest-reigning PWG World Champion of all time...

...and the man who ushered in a new Undisputed Era in NXT, as both NXT Tag Team Champion (albeit under the Freebird rule), the inaugural NXT North American Champion, the longest reigning NXT Champion of all time, and altogether the second NXT Triple Crown winner.

Due to a contract oversight, Cole's WWE contract actually expired in July 2021 without WWE realizing it. Cole agreed to a contract extension until the end of August so he could finish up his business in NXT, but after the extension expired he left WWE and joined with his former friends in The Elite as part of All Elite Wrestling, debuting at the end of All Out 2021 (only moments before Bryan Danielson would do the same).

Aside from his wrestling exploits, Cole can be found streaming regularly on Twitch as TheCHUGS

"IT'S TROPETIME WITH ADAM COLE, BAYBAY!":