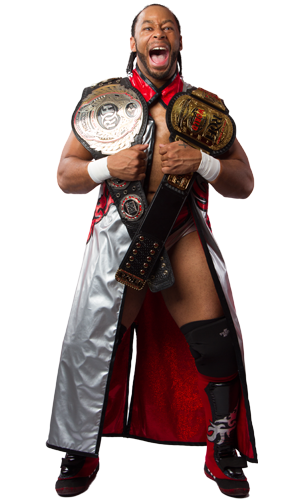 As ROH World and Television Champion.
Jay Lethal (real name Jamar Shipman, born April 29, 1985) is an American professional wrestler trained by Dan Maff and Mikey Whipwreck, best known for his tenures in Ring of Honor and TNA over the course of his career.
Advertisement:

He began his career mainly competing for ROH and Jersey All Pro Wrestling, being introduced in the former under the ring name Hydro through the stable Special K, a bunch of rich kid ravers with no respect for anything. Aside from being a stark contrast to his actual personality, this was also a comical heel gimmick which masked his growing in-ring talent. CM Punk and Samoa Joe both noticed this after facing him in the ring, to the point that Joe would go out of his way to get Lethal out of Special K (thus relinquishing the Hydro ring name) and make him his protégé and sidekick in the feud against the Rottweilers, most notable of which being Low Ki and Homicide. During this stretch he also became the fourth of only seven men to hold the ROH Pure Championship

. Eventually, Lethal would turn heel on Joe, engaging in a short feud with him before leaving ROH for the greener-seeming pastures of Total Nonstop Action Wrestling.

During his TNA tenure, after starting as a jobber with occasional flashes of brilliance, he first came into his own through a find-your-niche angle with Kevin Nash which introduced his skill at impersonating legends, creating the "Macho Man" Randy Savage Captain Ersatz persona of Black Machismo with the blessing and approval of Savage himself. It was during the Black Machismo gimmick that Lethal won his first TNA X-Division Championship

, and though that run lasted less than a week due to the Samoa Joe-Kurt Angle Match of Champions angle, he would win it a second time months later by defeating Angle himself, establishing Jay as a shining star of the X-Division as he went on to hold the title six times. He also formed a successful tag team with Austin "Consequences" Creed, winning the TNA World Tag Team Championship

Shortly after casting aside the Black Machismo gimmick in 2010, Lethal also had one of the most memorable segments in TNA history in the midst of a short feud with another of his childhood idols, Ric Flair, which was again set up by his impersonation talents and resulted in him beating both AJ Stylesnote who was Flair's on-screen protégé at the time and Flair himself cleanly in pay-per-view matches just after Styles had come off losing his TNA World Heavyweight title. These highlights became the first thing people would think of when they thought of Jay Lethal as a wrestling entertainer, though it wasn't enough to save his career in TNA, as he would be released in 2011 to head back to Ring of Honor. But this turned out to be a blessing in disguise.

Upon returning to ROH, Lethal has reinvented himself into one of the company's top wrestlers, winning the ROH World Television Championship

a few months into his return. As storylines went on following his TV title loss, including the occasional return of his Macho impersonation gimmick under the new handle "Machismo King", frustrations and ambitions built up with his character until a turning point was offered to him behind the scenes in April 2014.

At Supercard of Honor VIII, Lethal became the new centerpiece of Truth Martini's Power Stable, the House of Truth, as well as the first ever two-time World Television Champion, by accepting Martini's help in taking the title from Sicilian badass Tommaso Ciampa. Since then Jay has gone on a dominant tear with the championship, defending against many of the company's top mid-to-upper card talents and becoming the first champion to hold the belt for over a year. At this point he would declare himself the ROH Champion, aka the only champion that matters, over the company's actual World Champion Jay Briscoe. This eventually culminated in a winner-take-all match between the two Jays at Best in the World 2015, with Lethal pinning Briscoe (the first man to do so in over two years) to remain TV Champion as well as finally become ROH World Champion

. This made him only the third triple crown champion in ROH's then 13-year history.

Months later he would lose the Television Championship to former House of Truth centerpiece Roderick Strong. However, he has continued to retain the World Championship and maintain his position as the top wrestler in the company all the way into the second half of 2016, with himself and Martini even undergoing a nominal Heel–Face Turn through enduring violent attacks by ex-House of Truth teammate Donovan Dijak as well as the reinvented, newly-hostile Bullet Club faction, the latter resulting in the loss of first his hair, then his World Championship, at the hands of Adam Cole.

At Full Gear 2021, Lethal would come out and announce that he had signed with All Elite Wrestling, immediately challenging Sammy Guevara for the TNT Championship.

"The Greatest First Generation Tropes of All Time!":