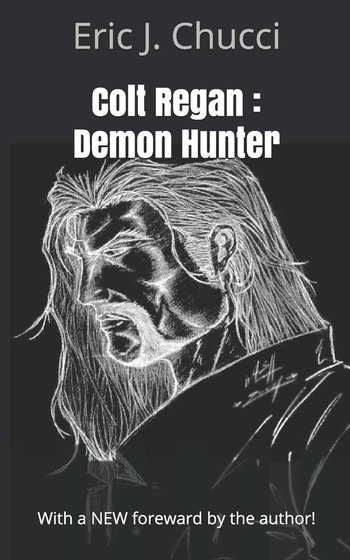 "There will always be more more demons. More people will die at their hands. But until I choke out my last breath, you can guarantee I'll be there to stop them dead."
— Colt Regan
"I'm not sure why they called it 'freshening'. It just mingled the old, chilly, stale coffee with the hot, making a half-drinkable mess in my cup. It didn't taste fresher. It tasted half-assed. I drank it anyway; it was still coffee."
— Colt Regan
Advertisement:

The Colt Regan series of novels by Eric J. Chucci rests decidedly somewhere between Horror, urban fantasy, and Mystery. Colt Regan himself is a mustachioed Badass Longcoat demon hunter who resides in a re-designed Los Angeles, California. The books are written from Colt's point of view in the future and thus full of his own stubbornness, reactionary mood swings, and self-deprecating humor. There are Four books in the series to date, a rumored nine total planned, and a tabletop RPG in the works as well.

Colt is an average Joe compared to the vampires, psychokinetics, demons, and were-people wandering the earth these days, but that doesn't stop him from sticking it to mindless monsters and conniving preternatural criminals. Helping him along are; Alex Asche, a psychometric goth kid; Joseph Cin, an incubus with an encyclopedic knowledge of the supernatural; and Myra Anderson, a were-fox social worker for the supernatually inclined.

Novels in the series so far: