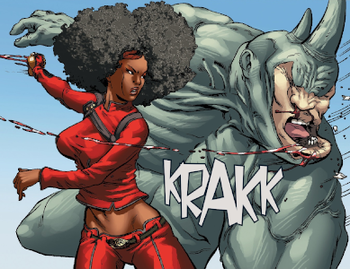 As a result of the rise of the Black Power movement, a common fixture in Blaxploitation movies but by no means unique to them is the presence of an afro-wearing brawler or martial artist, most of whom happen to be of Black African descent. Their afros are commonly on the very large side, but fighters with relatively short afros are also perfectly viable examples of the trope. Either way, their afros are considered very much part of their appeal.

While hairstyles involving afro-textured hair have existed in some form for centuries amongst people in Africa proper and the African diaspora elsewhere, the afro proper as popularly understood has its origins in the United States during the late 1960s and early 1970s with the rise of the Black Power movement in general and the "Black is beautiful" movement in particular, serving as a direct rejection of Eurocentric beauty standards regarding hair. Prior to this, many Black Americans in the United States would chemically straighten their curly afro-textured hair due to it being seen as "dirty" or "unkempt" by white Americans in its natural state.

Closely related to the Soul Brotha, an incredibly cool Black person who often wears an afro as part of their appeal, but the emphasis is more on their general coolness than their fighting ability. A Jive Turkey may have some overlap if they happen to be a afro-wearing fighter who happens to talk in a stereotypically outdated "street" manner, but is considered insensitive at best to harshly racist at worst due to straight examples tending to come off as mockingly depicting Black people speaking AAVE as buffoonish and/or inarticulate.

For afros played for comedy as opposed to badassery, see Funny Afro.