Lured into a Trap 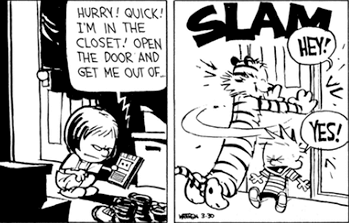 "All too easy."
"It's a trap!"
— Admiral Ackbar, Star Wars Episode VI: Return of the Jedi
Advertisement:

A character is given a seemingly innocent reason to go to a specific location, but it turns out to be a trick; rather than what they were expecting, they find their enemy lying in wait to capture or kill them. There are many different ways this could be played out: they could be a detective looking for a vital clue or meeting an informant; someone trying to heroically rescue one of their comrades (expect the Bound and Gagged party to have their mouth uncovered only to immediately yell that it's a trap); or even just someone delivering a message or package. But whatever they expected to find there, it was just a ruse; in fact, they've been lured into a trap.

This is usually a technique used by villains, though there are exceptions to this. Frequently, the one who sent the character is The Mole, in which case this will be played for Dramatic Irony (in that the audience can guess it's a trap but the characters won't know any better) or as a clue to The Mole's identity. This can also be the result of a Batman Gambit by the character's enemy.

If the trap is blatantly obvious, this becomes Schmuck Bait. If it's so obvious the character recognizes it for what it is, but then elects to walk into it anyway, it's Trap Is the Only Option. If the person springing the trap isn't even trying to hide his intentions, he may tell the target to Come Alone.

Larry's Gym ends with Jellien Larry being lured out to mayonnaise, Jelliens' kryptonite, and being doused in the stuff.

Larry's Gym ends with Jellien Larry being lured out to mayonnaise, Jelliens' kryptonite, and being doused in the stuff.