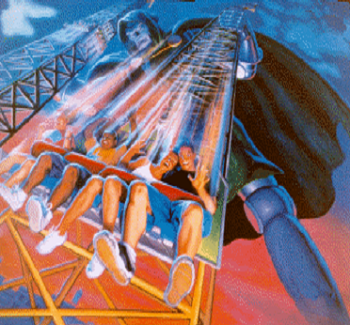 You are the last and final piece of my plan. Your terror, sucked from the very marrow of your being, will fill my Fear Fuel Reservoir, and make me the most powerful man on Earth!
— Doctor Doom
Advertisement:

Doctor Doom's Fearfall is a "Space Shot" ride that's among the several attractions in Marvel Super Hero Island at Universal's Islands of Adventure. Based around the arch-nemesis of the Fantastic Four, Doctor Doom, the ride's story is relatively straightforward - it involves the guests being used to power up the "Fusion Dynamo" - a device that Doom will use to eventually conquer the world.

In the queue line, it's explained through a propaganda film titled, "Latveria: Land of Enchantment", that the massive device that guests will be boarding is referred to as "The Tower of Doom", and its purpose is to generate fear out of anyone who rides it; as the "Fusion Dynamo" device is powered off of people's fear. The film elaborates on the backstory of the Tower, showing that it was initially stationed in Doom's country, Latveria, where all of the citizens were ordered to ride it. Realizing that the Fusion Dynamo needed more power, Doom had the Tower moved to the U.S., where he's now luring in unsuspecting visitors to do his bidding. Without it being explained what it actually does, the Fusion Dynamo is said to be the ultimate superweapon; and when fully powered up, Doom will use it exact his revenge on the Fantastic Four as well as exterminate anyone else who would stand in his way.

Following the pre-show, guests then board the Tower and experience Doom's invention for themselves. The attraction ultimately ends on an ambiguous note, leaving it unsaid as to whether or not Doom succeeds in his plans with his now fully-powered Fusion Dynamo.

Along with being one of the park's opening day attractions on May 28, 1999, the ride stands as one of the most visually-recognizable elements of both Islands of Adventure and the Orlando area as a whole, due to its two industrial-looking towers reaching a whopping height of 199 feet.