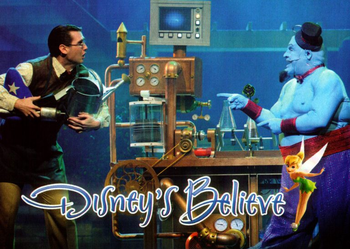 Disney's Believe is a Disney Cruise Line live show that plays in the Walt Disney Theatre aboard the Disney Fantasy and Dream cruise ships.

The story focuses on Dr. Cornelius Greenaway, a botanist who's too focused on his work to pay much attention to his daughter, Sophia, on her birthday. Dr. Greenaway's prize flower, the Filiola Fabulae, needs to bloom in time for an evaluation, but while he thinks science is the key, Sophia is confident the answer lies in magic and love. With the help of the Genie from Aladdin and a host of other Disney characters, Dr. Greenaway must learn to believe in magic in time to give Sophia the best birthday possible and help his flower grow!