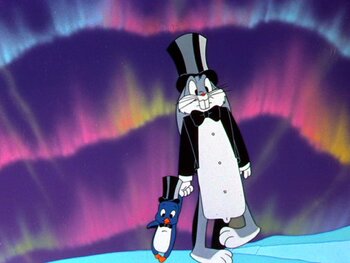 "I always wanted a nice, long, formal vacation."
Frigid Hare is a 1949 Merrie Melodies cartoon directed by Chuck Jones, starring Bugs Bunny. It is also the debut of the very obscure character, Playboy Penguin, who would make his second (and last) appearance in 1950's "8 Ball Bunny".
Advertisement:

Bugs Bunny is given a two-week vacation by Mr. Warner, so he decides to spend it at the Miami Beach. However, he takes yet another wrong turn at Albuquerque and ends up in Antarctica by mistake, where he encounters a pint-sized penguin on the run from an Inuit hunter. Even though he knows that it might hamper his vacation, Bugs doesn't have a choice but to help the little guy get away from the hunter.