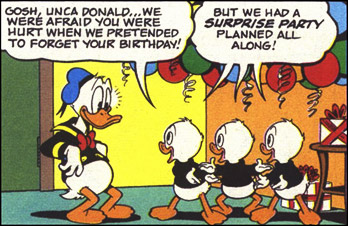 A major character is sure everybody's forgotten his or her birthday (or perhaps a similar occasion) and wanders around in an angry funk until surprise! They not only remembered it, they threw a Surprise Party!

The instigating factors in this plot are often that the character who is having a birthday often never actually comes out and says that it is their birthday, ("Hey, guess what day it is?" or "Isn't today a special day?") and the other characters further complicate by answering ambiguously. ("Seems like any other day to me.")

These sorts of plots are fueled by Poor Communication Kills and often have shades of Idiot Plot because they could be resolved by one of two simple actions. Main Character: "Hey, it's my birthday!" or Supporting Character: "Happy Birthday, [character]!" then saying they simply hadn't heard anything about a party yet. However, then there wouldn't be much episode to be had.

A subtrope of Birthday Episode. May overlap with The Complainer Is Always Wrong. For the version about the birthday of a marriage, (anniversary) see Forgotten Anniversary.

If the birthday is truly forgotten, or if nobody cares about it, it may lead to One-Person Birthday Party. Contrast Ironic Birthday, when the birthday character is stressed or depressed about something other than their surprise party.