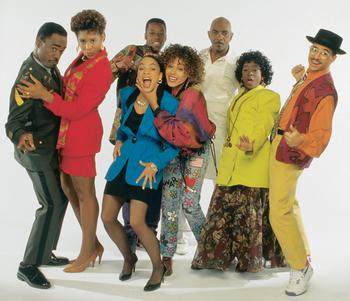 Originally, this was a Spin-Off of The Cosby Show: Denise Huxtable (Lisa Bonet) goes to college. It ran on NBC from 1987 to 1993.

The show was set at fictional, historically-black Hillman College in Virginia. Two of the supporting cast, Dwayne Wayne (Kadeem Hardison) and Whitley Gilbert (Jasmine Guy), proved to be Ensemble Darkhorses. In the second season, Lisa Bonet was let go because she and then-husband Lenny Kravitz were having a baby and the producers were concerned about Denise appearing to be an unwed mother. This led to Dwayne and Whitley becoming the new leads. Despite all the odds working against them, this actually changed the show into a hit and altered the formula from being a mere spin-off to an entity of its own.

The show also became acclaimed for tackling issues that other shows (especially The Cosby Show) refused to at the time, and became the first prime-time show to actually address the HIV/AIDS epidemic.

For animation buffs, it's one of the few on-screen roles of Cree Summer (who joined around season 2).