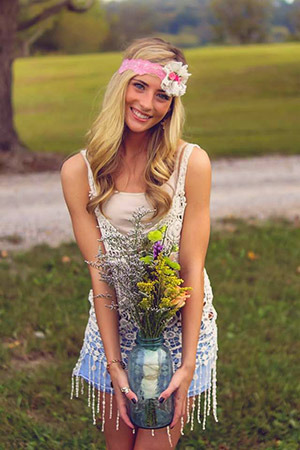 "She's like... a dirty hippie. Without the dirt."
— Strong Bad, Homestar Runner
Advertisement:

An overtly comical left-wing, anarchist-environmentalist-spiritualist character, with a penchant for tie-dyes, crystals, veganism, free love, oneness with nature and anything that is "all-natural."

This character is not very well grounded, tending to be overly-cheerful and flighty but not scatter-brained enough to qualify as The Ditz. She loves alternative medicine and might refer to real doctors as "greedy allopaths," followed by an immediate apology for "being so negative. That's not like me, at all."

Granola Guys are less common, and are often depicted as some flavor of New-Age Retro Hippie: either a Tommy Chong-ish Erudite Stoner, a balding old guy with a ponytail who only grudgingly accepts that the 1960s are over, or (in more recent works) a pretentious millennial hipster. Either way, expect him to wear a big beard.

You can expect either gender to play the guitar, badly (or actually be pretty good at it), or the ukulele. Regardless of gender, they are portrayed as sincere and well-meaning. Bonus points for having an out-of-the-box Hippie Name (think Frank Zappa's offspring).

Granola Girls (and Guys) tend to be Wide Eyed Idealists or occasional Cloudcuckoolanders, and often end up bringing other characters to follow their way of thinking, usually to solve a conflict or think about a situation from a different perspective. Especially true in an office setting, where they probably feel like a Fish out of Water: they're likely to spearhead the team-building exercise that gets their fellows and superiors through an issue none of them have been able to solve (in which case, compare Genius Ditz).

Compare Bourgeois Bohemian. If Soapbox Sadie doesn't become a Straw Feminist when she grows up, she'll become this trope instead. A Granola Girl who is really serious about the lifestyle may live on a Commune. If a Granola Girl is completely committed to the persona, she may also be a Hairy Girl and/or not wear a bra as well. Like her New-Age Retro Hippie counterpart, she often Does Not Like Shoes (unless they're Birkenstocks). Sometimes, she is a Straw Feminist or Straw Vegetarian, but she won't be nearly as aggressive as those tropes usually entail. May also be a hardline communist but she'll usually be more Rosa Luxemburg than Josef Stalin. Be on the watch for Round Hippie Shades.