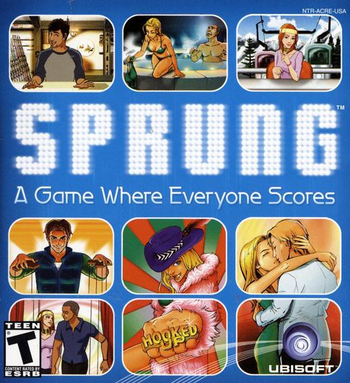 Sprung the Dating Game is a Romance Game Nintendo DS game released in 2004 by Ubisoft. The player is given the choice of playing as either the male protagonist Brett or the female protagonist Becky, as they both go on missions to date and fall in love at the Snow Bird Mountain Ski Resort. Of course, not much skiing actually goes on, and the game is split into separate 'scenes' where the player is given the objective of completing a certain goal to progress (for example, getting Becky out of her bad Blind Date.) Many of the scenes have little to do with the supposed romantic goals and instead provide opportunities for supposedly-wacky hijinks and collecting an impressive array of adventure game items, most of which can only be used to trigger joke responses.

The game is regarded as a failure at being a dating game, as there is little choice of Love Interests at its conclusion (only one romantic prospect for Becky, three for Brett,) and its lack of narrative flexibility left many people getting bored of reliving the same dialogue over again just to reach a certain outcome. It is often found in bargain bins due it being relatively unknown.

Unsurprisingly, Sprung contains many Dating Tropes and Love Tropes, as well as many a Shout-Out, paying tribute to The Lord of the Rings, Right Said Fred, and Dawson's Creek, among others.