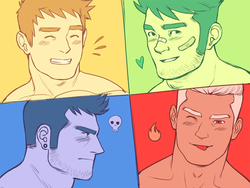 Super Health Club is a 2015 visual novel game developed by Oonyx with art by Dongsaeng. In the game, you play the new branch manager of an local health & fitness center, tasked by your asshole boss Richard with cleaning up the mess your predecessor left —- namely, crippling debt. You have six weeks to get the club back into the green.

While there, you meet your new staff: Thomas, a personal trainer; Chris, a competitive swimmer; Philip, a bodybuilder; and Kouji, a martial artist. Throughout the game, you develop relationships with each, possibly even initiating a romance with one of them ... assuming you play your cards right.