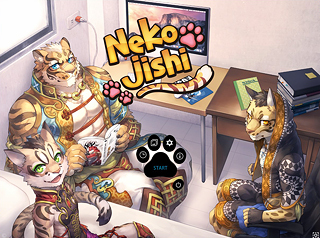 "Ever dream of having furry beast men hanging around with you?"
— Tagline
Advertisement:

Nekojishi is a Taiwanese fantasy/romance visual novel geared toward furry and gay audiences. A clean version is available for free on Steam, and an NSFW 'Limited' Version can be found on the team's site

College freshman Lin Tian-Liao discovers that he is able to see spirits when he returns to his dorm room one night and finds a large anthropomorphic tiger sitting on his bed. The big cat reveals himself to be the guardian tiger god of the Lin family, who has watched over Liao since he was little. They are promptly joined by a clouded leopard spirit, who is the one responsible for Liao's spiritual awakening, and a leopard cat spirit, possessing the body of Liao's senpai. Being gay and a furry, Liao is excited by these visitors, to say the least. However, each of them needs Liao's unique spiritual abilities to solve their own problems, and they aren't leaving until one of them wins his assistance.

On April 20, 2018, a DLC expansion pack titled A Sunny Day was released, adding ten new CGs to the main story and an entirely new epilogue chapter, taking place after the True Ending. Through arrangements made by Shu-Chi and the Yan family, Lin Hu and Likulau are given a single day to be incarnated and walk the earth as humans. Hoping to make the best of their time together, they decide to spend this day at a convention. However, Liao still has reservations over Shu-Chi’s ability to pull all of this off with his family. Perhaps there's more that's been left unsaid...

On March 3, 2020, a sequel to Nekojishi was announced: Nekojishi: Lin and Partners. It is currently slated for release in 2021 on PC, Mac, and Nintendo Switch.