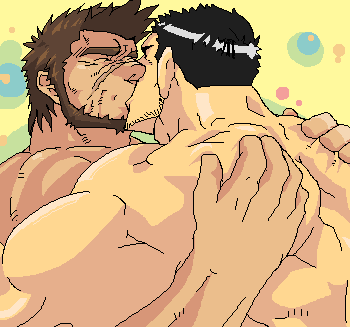 It usually doesn't get much tamer than this.

Bara is a Japanese genre of manga and art for gay and bisexual men, usually (but not exclusively) made by gay or bisexual men. In Japan it's more commonly known as "gei comi", "gei manga", or "menslove". Note that, like most Manga Demographics, Bara is defined in terms of the target audience, not the authors or the subject matter; there are women who write Bara and are published in Bara magazines, while the rare few stories by gay male authors about gay men which are intended for a general (presumptively heterosexual) audience are not usually classified as Bara.

Bara can cover any topic but most focuses on romance or sex. Bara generally features mature and realistic(ish) relationships, rather than overly melodramatic soap opera plots. Bara is more likely to feature manly and muscular (sometimes hairy) characters with varying degrees of body fat, as opposed to the androgynous and effeminate boys commonly found in Yaoi. It also, usually, tends to avert, subvert or invert the Uke and Seme dynamics; e.g., frequently the Seme is someone younger and much "cuter" looking. Bara also tends to be much more explicit than yaoi.

Bara evolved from illustrations and manga in gay men's general-interest (and/or pornographic) magazines, which partially accounts for the differences in style and tone, as well as the generally short story length. It is generally considered a separate genre from yaoi; many Japanese bara artists would be offended if their works were called yaoi. The term was popularized by a Japanese gay magazine called Barazoku (lit. rose tribe), the same magazine that coined the term Yurizoku (lit. lily tribe) that later became Yuri. See the Wikipedia on Bara

Although gay men's general-interest magazines have published occasional manga stories since the 1970s, the first all-manga gay magazines to become commercially successful date only from the early 2000s. The two major commercial publishers at the moment are Furukawa Shobu (a publisher of gay men's magazines) and Oakla Shuppan (a yaoi publisher that also has some bara manga magazines). Kinniku Otoko (literally "Muscle Man") is one of the manga magazines that focuses on this genre.

Gengoroh Tagame is an example of a well-known artist. Other popular and well-known artists include Gamma, Jin, Kazuma, Manya, Takeshi Matsu, Inaki Matsumoto, Ron-9 (who drew the top picture), Takakunozomu, and Matsuzaki Tsukasa. Takaki Kyou has also got a lot of popularity with the kemono bara crowd. Female fans do exist, to the point where a couple short-lived manga anthologies catered to both male and female Bara fans.

Unlike Yaoi Fangirls, Bara fans don't worry about shipping and are not so vocal about it either. However, LGBT Fanbase plays an important role on the bara fandom, since official works were quite rare until recently, so fans have to rely on Doujinshi, Fan Art and Fan Fiction.

This article just describes the genre — No Examples, Please.