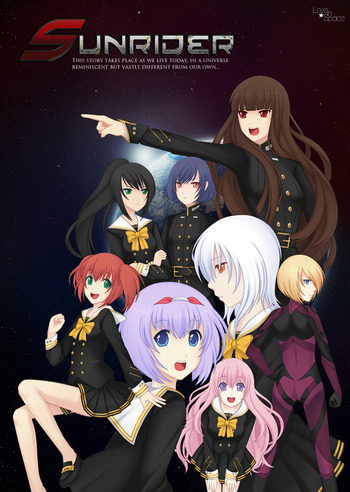 Not pictured: Space Whales.
This story takes place as we live today. In a universe reminiscent but vastly different from our own...
Advertisement:

In an alternate universe to our own, humanity has subjugated all other life in the galaxy and spread throughout the stars. However, peace is a forgotten state of existence. A new revolutionary front called the People's Alliance for Common Treatment (PACT) has toppled the once mighty New Empire and is spreading throughout the galaxy. Led by the mysterious Veniczar S. Arcadius and his cult of personality, PACT appears intent on dominating every human being in the galaxy.

You are Captain Kayto Shields of the starship Sunrider. Hailing from the neutral world of Cera, you are thrown onto the galactic stage when your world is invaded by PACT. Your mission: To find allies from across the galaxy and stop the PACT menace once and for all.

on Kickstarter, reaching over fourteen times the required amount.

The first 2 chapters, First Arrival and Mask Of Arcadius, are also on Steam here,

and a novelization is available here.

The 3rd chapter, Liberation Day, was released on March 4, 2016 and is available here

. A DLC chapter called [RE]turn was added on May 24, 2016. Sunrider Veniczar, a prequel novel with heavy spoilers, can be read on their Patreon page

by pledging at least $5. Sunrider Academy, a Dating Sim set in an Alternate Universe where the main cast are still in high school, was released on April 15, 2015.