Fighting for a Homeland 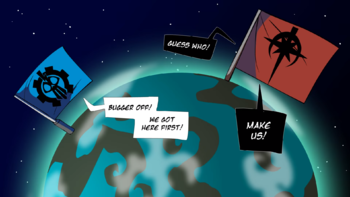 The Exiles vs The Dominion, the battle rages on to make Nexus their new home, who will win?
Poland is not yet lost
So long as we still live.
What foreign powers have stolen from us,
We shall retake with a sabre.
—First verse of "Poland is Not Yet Lost", national anthem of Poland
Advertisement:

The motivation of fighting solely for monetary gain is generally not treated as sympathetic. However, when the compensation is more than simply money, that can change.

This group of people lost their homeland and has been seeking it ever since. Perhaps it was destroyed, or they were exiled, or they were on the losing end of a war. When their home is still habitable, they often want their original home back and prepare to solve the problem that prevent them to live in it. However in cynical stories, some bad things usually happened, making it uninhabitable. They decided to abandon it, choosing to wander around until they find someplace to call home.

They often have no one but each other. As a consequence, their commander is often A Father to His Men, and they are True Companions. (But not in more cynical stories.)

Compare with The Promised Land, which is what the characters in the work will view this future homeland as.

Not to be confused with fighting for your homeland. Nor your homeland getting attacked in a war though this trope can certainly be the result if the heroes lost said homeland the first time, making them extra determined to prevent that from happening again. Contrast Eagle Squadron, where you have people fighting for someone else's homeland.