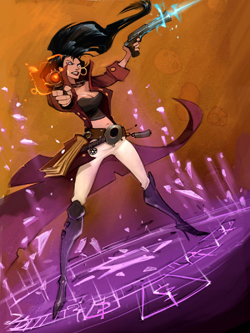 Combining swordplay and sorcery is a viable strategy in your Standard Fantasy Setting, but perhaps this magic wielding character prefers to engage enemies at a distance to use their Improbable Aiming Skills. Or perhaps this character lives in a setting where Fantasy Gun Control isn't in effect and swords are obsolete. Enter the Mage Marksman.

Compare Magic Knight and Kung-Fu Wizard, wherein the character uses a sword or their bare hands alongside magic. See also Postmodern Magik and Superhero Packing Heat. Not to be confused with Depleted Phlebotinum Shells, where the weapons or bullets themselves are magically enhanced, though a character who fights like this may well combine these tropes.