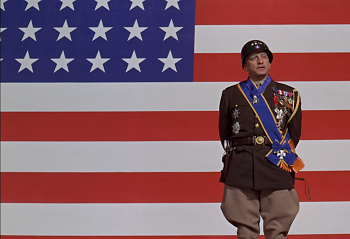 "I'd like to make one final statement. Kif, c'mere and hold up the flag. And wave it a little, for God's sake."
— Zapp Brannigan, Futurama
Advertisement:

Where the hero poses in front of (or next to) a prominently shown national flag.

Any sort of overly patriotic (or even generically heroic) speech will have the flag slowly descending into view behind the speaker and some music (usually the Dambusters march, for some reason) slowly rising to match. You can also expect to see it when patriotic heroes are just posing for effect or even rushing to help others.

The use of the American flag this way can become Narm very easily, especially outside the United States. In non-American works, it will almost certainly be a deliberate parody of Eagleland stereotypes.

Largely a subtrope of Patriotic Fervor. Compare Wearing a Flag on Your Head.