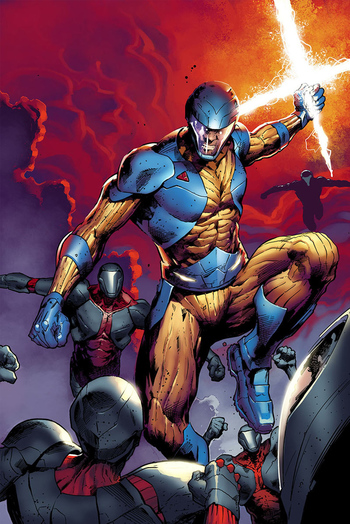 When it comes down to comic book universes, at least one character usually serves as the company mascot. DC has both Superman and Batman. Marvel has Spider-Man. Image, Spawn. When it comes to Valiant Comics, though, that flagship title belongs in the hands of Aric of Dacia, better known as X-O Manowar.

In Valiant's original continuity, Aric was a powerful warrior and heir to the throne of the Visigoths, a nomadic tribe in conflict with The Roman Empire. That all changed, however, when he was abducted by the Spider Aliens, a race of, well, spider-like aliens that forced Aric and other prisoners into slave labor. A chance encounter between the Spider Aliens and Solar allowed Aric to grab the control ring for Shanhara, a Manowar Class Armor, in order to return to Earth, only to realize that several centuries have passed thanks to Time Dilation. Now trapped in the present day (aka The '90s), he befriends Ken Clarkson, a schemer who helps Aric take over as CEO of a corporation called Orb Industries. Hilarity (and awesomeness) ensues.

On May 2012, X-O ushered in a brand new era of the Valiant universe with a new series by Robert Venditti and Cary Nord. Aric's origin remains mostly the same, except the Spider Aliens have been replaced by the Vine, a plant-worshiping race capable of communing with each other through a collective consciousness. Inciting a revolt with the other prisoners, Aric once again manages to steal away Shanhara, the Vine's most sacred relic, and once again returns home to find himself in present-day Earth. However, Aric leaves far more destruction in his wake in his battles with the Vine, and his growing tensions with modern society are what lead up to the events of Unity. He also served as the central figure in Armor Hunters, a Crisis Crossover where the Earth was invaded by the titular Armor Hunters, a band of mercenaries dedicated to exterminating all Manowar armors.

On September 2016, Venditti's run of X-O Manowar came to a close, ending at 50 issues.note Plus an issue #0, an Annual issue and two one-shot specials It was relaunched in 2017 with Matt Kindt (the previous writer of the rebooted Rai comic) as writer and various artists. Dennis Hopeless succeeded him in 2017.

The relaunched X-O Manowar contains examples of the following: