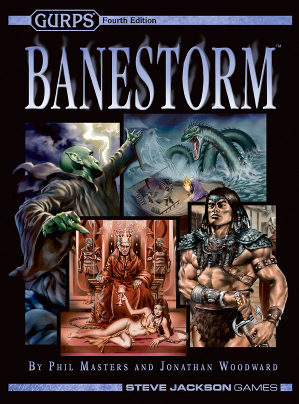 "Welcome to the land of Yrth, a magical realm of incredibly varied races and monsters — including people snatched from our Earth and other worlds by the cataclysmic Banestorm! Whole villages were transported — from such diverse locales as medieval England, France, Germany, and the Far East. Now humans struggle with dwarves, elves, and each other. The Crusades aren't ancient history here — they're current events!"
Advertisement:

That sales pitch very much sums up the setting of GURPS Banestorm, by Phil Masters and Jonathan Woodward. This setting book is the latest presentation of Yrth, the oldest fantasy world originally designed for GURPS, which was originally detailed in the first edition of GURPS Fantasy (though technically it first appeared in Orcslayer as the setting for nine combat scenarios). GURPS Banestorm revises the setting material from that book, advances the setting date in parallel with the real-world publication dates, and updates the rules material from GURPS 3rd edition to 4th edition. Additional information on Yrth has appeared in various published scenarios, magazine articles, and secondary supplements.

To expand on the story mentioned above, Yrth was originally populated by elves, dwarves, gnomes, orcs, and ogres. But a faction of the elves, deciding to rid themselves of the destructive orc race, designed a powerful magical ritual called the "Orcbane". It did not work as planned. The resulting magical catastrophe, known as the Banestorm, brought countless people and creatures to Yrth, including humans from medieval Earth. And as humans tend to do, they soon expanded to take over most of the continent of Ytarria, displacing the native elves and orcs (the dwarves remained safe in their mountain fortresses).

Nearly a thousand years later, Ytarria is now more or less a Standard Fantasy Setting, dominated by The Empire of Megalos, surrounded by various other nations on all sides. Technology is maintained at a relatively low level by the Ministry of Serendipity, an Imperial office which hunts down rogue technologists and victims of modern Banestorm incidents, in order to brainwash them and erase dangerous information from their minds.

The company gives the book a Web page here.

This setting provides examples of: