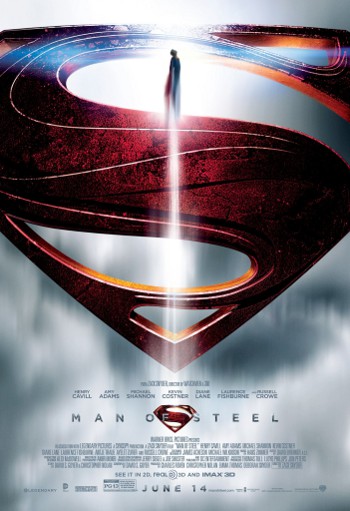 Nice "S".
"You will give the people of Earth an ideal to strive towards. They will race behind you. They will stumble. They will fall. But in time, they will join you in the Sun. In time, you will help them accomplish wonders."
— Jor-El
Advertisement:

Man of Steel, released in 2013, is a movie based on the DC Comics superhero Superman, starring Henry Cavill in the role. Zack Snyder directed, Christopher Nolan served as producer and wrote the story, David S. Goyer and Nolan wrote the script, and Hans Zimmer composed the film's score. The film has no connection to Superman Returns or any other previous Superman film; instead, it serves as a Continuity Reboot that retells Superman's origin story (much the same as Nolan's Batman Begins did after the Batman film series). It became the cornerstone of the DC Extended Universe, Warner Bros/DC's shared comic book movie universe.

On the distant planet Krypton, scientist Jor-El (Russell Crowe) recognizes the inevitability of his planet's destruction due to his society's arrogance and shortsightedness. In an attempt to preserve Krypton's future, he and his wife Lara Lor-Van (Ayelet Zurer) conceive a son, Kal-El, naturally—the first natural birth in generations because of a genetically-engineered caste system. Shortly after Kal-El's birth, the leader of Krypton's military, General Zod (Michael Shannon), attempts to take over Krypton in a military coup. Zod breaches Jor-El's laboratory and watches Jor-El and Lara send Kal-El off to a distant planet, along with the genetic keys to the Kryptonian race, so he and they can survive Krypton's destruction. Zod kills Jor-El in retaliation, and his coup attempt quickly fails. He and his henchmen are then banished to the Phantom Zone. Not long after the banishment takes place, true to the late Jor-El's predictions, Krypton implodes.

Kal-El arrives on Earth and grows up with the Kents, Jonathan (Kevin Costner) and Martha (Diane Lane), loving parents who give him the name "Clark". Clark finds himself with a wide array of superhuman abilities and wanders the world as an adult, helping people in trouble whenever possible but fleeing out of the fear of not being accepted. When he finds an ancient spacecraft of Kryptonian origin in the Arctic, he receives the answers to questions he has long asked himself; these answers give Clark hope that the right approach will allow him to co-exist with humanity as a hero. But talented reporter Lois Lane—and, later on, Zod (who managed to break out of the Phantom Zone)—ultimately force Clark to reveal himself to the world... just before Zod and his remaining followers imperil Earth and humankind in an attempt to create a new Krypton.

Man of Steel Prequel, a comic book starring Kara Zor-El, was released shortly before the release of the film, and it explained how the Kryptonian spacecraft landed on Earth. A follow up Crossover film with Batman, Batman v Superman: Dawn of Justice, was released in 2016.

Man of Steel provides examples of:

open/close all folders
Tropes # to F
Tropes G to M
Tropes N to S
Tropes T to Z
Welcome to the Planet.
Feedback

One of the Nostalgia Critic's criticisms about Man of Steel is that John might have implied that Clark should have left his classmates to drown to keep his secret from coming out. Joe quickly points out that John never outright said to let the kids die, only that he doesn't know what to say and just didn't want anything to happen to his son.

Example of:
Parents as People

One of the Nostalgia Critic's criticisms about Man of Steel is that John might have implied that Clark should have left his classmates to drown to keep his secret from coming out. Joe quickly points out that John never outright said to let the kids die, only that he doesn't know what to say and just didn't want anything to happen to his son.