Dive Under the Explosion 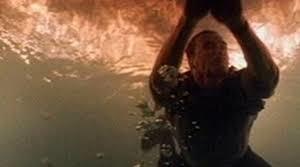 There's a noted tendency for those of an Action Hero persuasion to somehow always end up diving into water to avoid an explosion. There's just something cool about Outrunning the Fireball by the skin of your teeth as you enter the water for safety. The diver probably possesses Super Not-Drowning Skills, but it may also involve a Kiss of Life when two or more people dive into the water.

There may be Truth in Television, as this trope was deemed plausible by Mythbusters on 31 March 2010: shockwaves were proven to be partially dampened by the water, to a degree dependent on the explosive used.

May overlap with Symbolic Serene Submersion. Not to be confused with Dunking the Bomb, where the explosion happens underwater (making it the worst place to be).