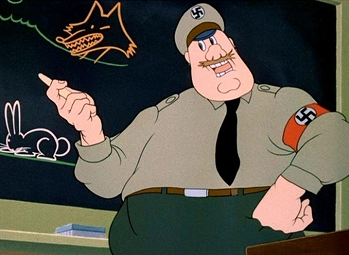 Clearly an advocate of critical thinking.
"Okay guys, one more thing, this summer when you're being inundated with all this American bicentennial "Fourth of July" brouhaha, don't forget what you're celebrating, and that's the fact that a bunch of slave-owning, aristocratic, white males didn't want to pay their taxes."
— Teacher in Dazed and Confused dismissing her class into the summer holidays
Advertisement:

There is always that one teacher, the one who is always bringing his or her politics into the classroom and is extremely passionate about it. Be it about religion, the government, or ethics, morality, and values, this teacher is always ready with their own arguments and/or long-winded speeches. Typically, this person teaches a class involving social sciences (e.g.: history, sociology, politics), but it can be any teacher in any subject. College professors are even more likely to be politically motivated.

The Politically Motivated Teacher can be portrayed either as a positive or a negative thing, generally depending on whether or not the teacher's views align with the author's. If it's shown in a positive way, then the teacher will often stimulate intelligent debate, helping his or her students to think more critically about the events in the world around them and get more involved in society. If it's shown negatively, the teacher will run the classroom with an iron fist and punish students who voice dissenting political views instead of promoting discussion. Either way, expect anvils to be dropped like a bowling ball tied to a weak tree branch.

A Hippie Teacher can be related, for reasons of hippies being very politically radical. The negative version of this trope often takes the form of a Sadist Teacher with Straw Character elements, while a positive version is usually a Reasonable Authority Figure.

This trope is definitely Truth in Television, as any college student (and sometimes high school students) can attest to. The political alignment of these teachers often correspond with the general atmosphere of the school in which they teach, though there are without a doubt many who go against the grain of their institution's political philosophies.