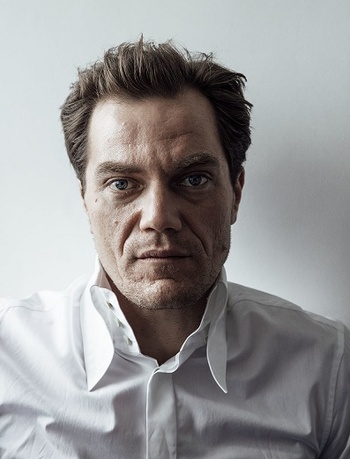 Born in Kentucky to a single mother, he got his first work as an actor on the Chicago stage, at various times working for such theatre companies as Steppenwolf, The Next Lab and the Red Orchid Theatre. He eventually started to get small parts in Hollywood movies, too, notably the Jerry Bruckheimer-produced films Bad Boys II, Pearl Harbor, and Kangaroo Jack. This visibility (along with his Academy Award nomination for Revolutionary Road) has led to him recieving larger and more acclaimed roles in (mostly independent) films, such as Bug!, The Runaways, Before the Devil Knows You're Dead, Bad Lieutenant: Port of Call New Orleans, Shotgun Stories. He also works quite regularly on stage, having performed in many works by Tracy Letts in Chicago and New York as well as receiving a Tony nomination for his role in a recent revival of Long Day's Journey Into Night.

He is best known for his virtuoso ability to play repressed, unstable, and otherwise crazed characters. He has also been compared to Willem Dafoe in terms of roles and Christopher Walken for his ability to completely steal a movie simply by showing up. His best known performances are as John Givings in Revolutionary Road, prohibition agent Nelson Van Alden in Boardwalk Empire, Curtis LaForche in Take Shelter, and General Zod in Man of Steel.

Despite the large number of villainous roles to his name, Shannon is very much known to be a nice guy who loves his daughter and has a great sense of humor.

Not to be confused with Michael J. Shannon (no relation).

This actor's works provides examples of: