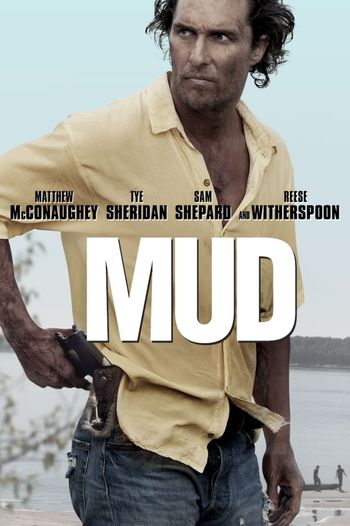 Mud is a 2012 American film written and directed by Jeff Nichols. It's a Coming of Age Story mixed with crime drama set on the downstream of Arkansas River.

Ellis (Tye Sheridan) and Neckbone (Jacob Lofland) are two fourteen-year old boys living in De Witt, Arkansas. Finding a boat that was stuck on a tree in the middle of an island led the two friends into an encounter with a strange man who called himself Mud (Matthew McConaughey). With Mud promising to give them the boat, Ellis and Neck agreed to help him live while he waited for his lover, Juniper (Reese Witherspoon), to come and go with him. However, things aren't so simple as that. Bounty hunters began to visit the town looking for a murderer, and the truth about Mud began to unveil.

The film received universal acclaim and many accolades. Matthew McConaughey earned much praise and acknowledgements to his acting abilities.

Mud contains examples of these tropes: