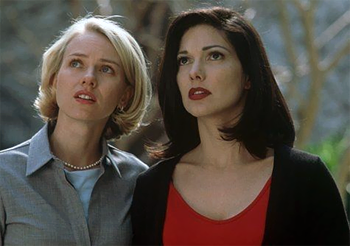 Betty (left) and Rita (right) are also wondering what the hell is going on.
"It's strange to be calling yourself."
Advertisement:

The plot primarily focuses on two young women: Betty Elms (Watts), a perky blonde Canadian who comes to Hollywood to pursue an acting career, and Rita (Laura Harring), a sultry brunette who's developed a case of amnesia after an attempted hit on her turns into a car accident on the eponymous Mulholland Drive.

After arriving at LAX and moving into her aunt Ruth's apartment, Betty discovers a nude Rita in the shower and isn't too weirded out because she thinks that Rita is a friend of her aunt Ruth's. However, she soon finds out that Rita has amnesia and that all she remembers is being in the accident. They then discover not only sets of 100 dollar bills in Rita's purse but also a blue key, further increasing the mystery. So out of the goodness of her heart and because "It'll be just like in the movies!", Betty decides to play Nancy Drew and help Rita discover her true identity, and the two become fast friends (and more).

In addition to the main plot, there is also a film director (Justin Theroux), who just can't seem to catch a break. He even walks in on his wife in bed with their pool man, played by Billy Ray Cyrus of all people. Betty's eccentric landlady is played by Ann Miller in her final role before her death. There is a terribly inept hitman played by the incomparable Mark Pellegrino, a creepy cowboy who may or may not be part of this world, a surreal theatre with an even more surreal magician/MC, that mysterious blue box, and some sort of grungy zombie hobo who lives behind an old-fashioned diner and gives a man a heart attack at just the sight of it.

And then the movie gets really weird in the second half.

Yes, it's one of those movies.

It also has nothing to do with the 1996 film Mulholland Falls.