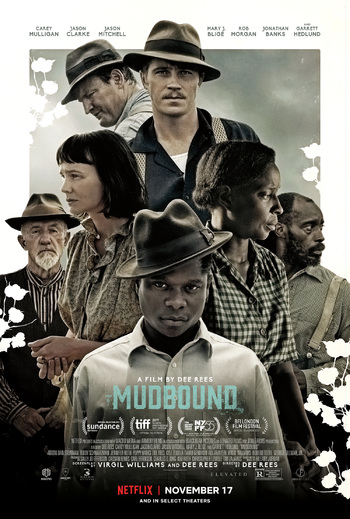 "What good is a deed? My grandfathers and great uncles, grandmothers and great aunts, father and mother, broke, tilled, thawed, planted, plucked, raised, burned, broke again. Worked this land all they life, this land that never would be theirs. They worked until they sweated. They sweated until they bled. They bled until they died. Died with the dirt of this same 200 acres under their fingernails. Died clawing at the hard, brown back that would never be theirs. All their deeds undone. Yet this man, this place, this law... say you need a deed. Not deeds."
—Hap Jackson
Advertisement:

Mudbound is an American period drama film directed by Dee Rees and written by Rees and Virgil Williams, based on the novel of the same name by Hillary Jordan and distributed by Netflix in 2017. It stars Carey Mulligan, Garrett Hedlund, Jason Clarke, Jonathan Banks, Rob Morgan, Jason Mitchell, and Mary J. Blige.

The film depicts two families in rural Mississippi; the white McAllan family and their employees, the black Jackson family, who both try to make their living off the land. In particular it comes to focus on two World War II veterans – one from each family – who return to their families and end up forging a bond out of their shared PTSD.