Film / Murder in the First 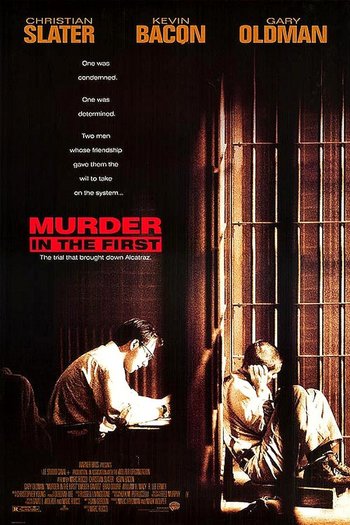 "Prior to Henri Young, there had been five escape attempts. No one had made it. The reputation of Alcatraz as being inescapable was secure. Six inmates had died trying to escape. The ones who didn't die sometimes wished they had."
— Opening Narration
Advertisement:

Murder in the First is a 1995 prison and legal drama directed by Marc Rocco, starring Christian Slater, Kevin Bacon, and Gary Oldman.

In 1941, an Alcatraz prisoner named Henri Young (Bacon) is tried for murder after going berserk and ripping out the throat of a fellow inmate with a spoon. His execution seems inevitable; however, his lawyer James Stamphill (Slater) has other ideas.