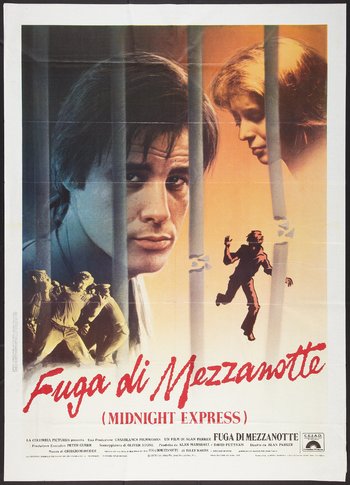 "Have you ever been in a Turkish prison?"
"What is a crime? What is punishment? It seems to vary from time to time and place to place. What's legal today is suddenly illegal tomorrow because society says it's so, and what's illegal yesterday is suddenly legal because everybody's doin' it, and you can't put everybody in jail. I'm not saying this is right or wrong. I'm just saying that's the way it is."
— Billy Hayes
Advertisement:

The autobiography Midnight Express was written by Billy Hayes and published in 1977. The title was prison slang for an inmate's escape attempt. A year later in 1978, the film version directed by Alan Parker and starring Brad Davis as Billy Hayes was released. It was the breakthrough project of Oliver Stone, whose screenplay won him his first of three Oscars.

On October 7, 1970, after a stay in Istanbul, a US citizen named Billy Hayes is arrested by Turkish police, on high alert due to fear of terrorist attacks, as he is about to fly out of the country with his girlfriend. After being found with several bricks of hashish taped to his body (about two kilograms in total) he is sentenced to four years and two months' imprisonment on the charge of drug possession. At Sağmalcılar prison, his life becomes an utter living hell. His case is appealed, but instead, he is made an example of by being re-sentenced to thirty years (the punishment for drug smuggling). With his options running out, his only option is the Midnight Express.