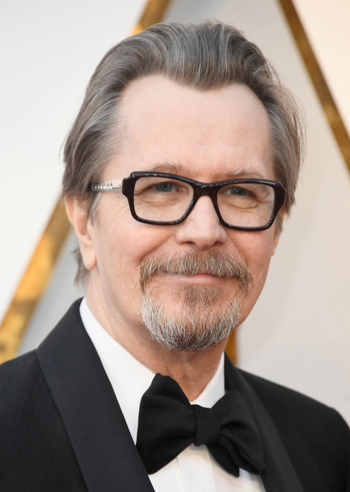 Gary Leonard Oldman (born 21 March 1958 in London, England) is an English actor who found fame in roles such as Sid Vicious in the 1986 biopic Sid & Nancy and the title character of the 1992 blockbuster Bram Stoker's Dracula. Often hailed as one of the greatest chameleons of his time, it can be almost impossible to spot him from one role to the next. He is known for portraying real-life figures, like the aforementioned Sid Vicious, or Lee Harvey Oswald. Oldman is also known for playing the main villain, particularly hugely obvious villains whom everyone trusts anyway, in movies (such as The Professional, Air Force One and The Fifth Element)... except for when he hangs out with Batman or Harry Potter, or when he's Beethoven or Guildenstern... We're pretty sure he was Guildenstern. (He's actually Rosencrantz, but who's keeping track?)

But besides these four, when Oldman isn't the villain, he's just plain crazy. (Ever seen his guest spot on Friends?) And it's not like Sirius doesn't have his moments. Despite his obvious villain roles, he can play an excellent Magnificent Bastard, though still usually with a patina of dark humour. However, as turkeys like Quest for Camelot and The Unborn demonstrate, he also has an unfortunate tendency to do anything for money (except, of course, when it's a non-union project).

He has directed one film, Nil By Mouth, a deeply grim, profanity-laden film about a dysfunctional family living in East London (allegedly inspired by his own rough childhood). He also directed the live stream of a Jack White concert.

His career is seen as a good indicator of how actors have to actively pursue awards. It took him thirty years to receive an Oscar nomination (for Tinker, Tailor, Soldier, Spy), despite his undeniable talent, and it's pretty clear that he just doesn't care about that sort of thing. He did finally win in 2018 for playing Winston Churchill in Darkest Hour.

Has a very special friendship

with Tim Roth. He was previously married to Lesley Manville.

Tropes that apply to Gary Oldman as an actor:

Especially significant as the whole movie is a reconstruction of sci-fi movies and comics of the 1970s and 1980s.

Example of:
A Villain Named "Z__rg"

Especially significant as the whole movie is a reconstruction of sci-fi movies and comics of the 1970s and 1980s.