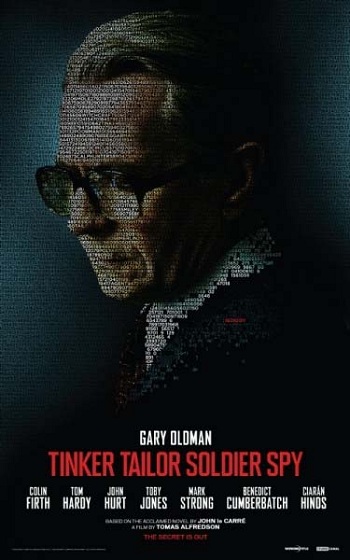 For a guy named "Smiley", he sure looks serious.
Ricki Tarr: She claimed to have information vital to the safeguarding of the Circus.
George Smiley: Anything more?
Ricki Tarr: I said that she had information concerning a Double Agent.
Advertisement:

Tinker, Tailor, Soldier, Spy is an espionage thriller directed by Tomas Alfredson and adapted from the John le Carré novel of the same name, the first in The Quest for Karla trilogy. The film was released in September 2011.

Set in the 1970s, George Smiley (Gary Oldman), once a master spy for "the Circus", is pulled out of retirement by his former colleague Peter Guillam (Benedict Cumberbatch) for one last job: rooting out a Russian mole from among the upper echelon of the Circus' leadership. To do so, Smiley must dig into some of the most dramatic incidents in recent Circus history: the tale of AWOL spy Ricki Tarr (Tom Hardy), the ousting of former chief "Control" (John Hurt), the leadership coup that put Percy Alleline (Toby Jones) in the top job, a botched operation in Hungary that resulted in the public wounding and capture of Jim Prideaux (Mark Strong), a covert intelligence source code-named "Witchcraft", and even persistent rumours that Circus officer Bill Haydon (Colin Firth) has been having an affair with Smiley's wife. All this leads to a wider conspiracy that Smiley must unravel before the Russian spymaster known as Karla uses it to destroy the Circus.

The film has been a financial success and a critical darling, garnering a slew of nods from the BAFTAs and the British Independent Film Awards. Gary Oldman received his first Oscar nomination for Best Actor, and the adapted screenplay and original score are nominated as well. Both Gary Oldman and Tomas Alfredson have expressed a willingness to return for a sequel based on Smiley's People, the third book in Le Carre's The Quest for Karla trilogy note the 1980s miniseries also skipped over the second book, The Honourable Schoolboy, which would require some expensive location filming.

The page for the original novel (and the rest of the trilogy) can be found here; the BBC miniseries starring Alec Guinness as George Smiley are here.