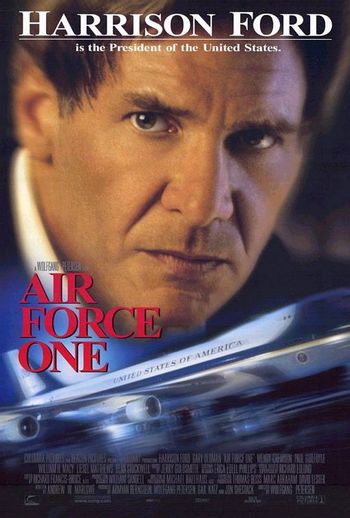 And he wants you off his plane.
"Harrison Ford is the President of the United States."
—Tagline
Advertisement:

Air Force One is a 1997 film directed by Wolfgang Petersen and starring Harrison Ford.

The United States has just deposed Ivan Radek, the dictator of Kazakhstan. US President James Marshall (Ford) is returning to the United States on the titular aircraft after a conference in Moscow. Little does he know that Radek loyalists have snuck on the plane by disguising themselves as journalists. Shortly after takeoff, the terrorists hijack the plane with the goal of securing Radek's release. Unfortunately for them, Marshall has no intention of surrendering to the hijackers.

Get off my tropes: