I Am Not Leonard Nimoy 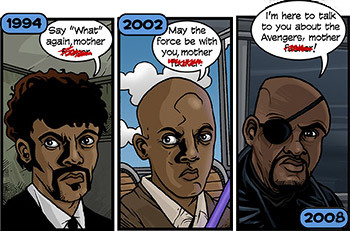 Samuel L. Jackson as Jules Winnfield, Mace Windu, and Nick Fury.
"And yeah, that's what I'm calling him. I know the character has a name, but fuck it, you're never going to call him that, you're just going to call him "Will Smith fish."
— Doug Walker on Shark Tale
Advertisement:

Sometimes an actor is so iconic, famous, or interesting that their celebrity casts a shadow over the roles they play. That's not Hancock in skin-tight leather flying around saving people; that's Will Smith! In Hitch, that's Will Smith giving dating advice. Independence Day has Will Smith as a fighter pilot! Audiences are unable to commit to a Willing Suspension of Disbelief and simply see the actor on screen rather than the character.

Sometimes this occurs because the actor is a media darling or tabloid punching bag, constantly in the news. After a while, audiences become so familiar with the actor's personal life that they can no longer see him or her as another person. Other times this is the result of movie stars becoming typecast or having limited range. Audiences come to expect the actor to play the same role over and over again, which becomes part of the actor's larger-than-life persona.

Polar opposites of this trope are actors such as Geoffrey Rush, Gary Oldman, and — to a lesser extent — Brad Pitt, who are capable of putting masks on and completely becoming another character or person entirely. Hence, this isn't an inherently bad thing; some of the most successful actors in history have been of the "As themselves" type. So they can still be very good; they just tend not to be very versatile, and you'll usually only see them in the same (or similar) types of roles.

For an actor's career, this can be a double-edged sword. If people like the actor, they'll stay loyal to him and see his movies regardless of what they're about. On the other hand, if audiences turn against the actor, they won't be able to appreciate his work no matter how good the material is. And if they really want to be taken seriously and play Hamlet, it's a real (but not impossible) obstacle to overcome.

The complete opposite of this trope is I Am Not Spock, where an actor is unable to step out of the shadow of their most famous role. See also Typecasting and Adam Westing, when an actor falls into this and cultivates it willingly.