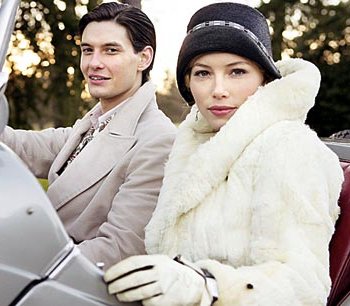 "Oh Johnny, dear, you know how much I love you, so please try to take this in the best possible light: I'm getting a machine gun and mowing down your entire family."
— Larita
Advertisement:

Not long after World War I, the Whittaker family awaits the return of their only son John from the continent. To their dismay, he brings a bride; a glamourous American racecar driver. The bride, Larita, thinks she and John will visit and then move to London, where he'll work and she'll race. But John is the heir to the estate, and his mother, Veronica, is nothing if not a master manipulator. Soon it's all-out war between mother and bride. John's father, Major Jim Whittaker, finds himself in the bride's corner, along with the family servants; John's sisters, Hilda and Marion, side firmly with their mother, while their neighbours, the wealthy Hurst family, look on.

Easy Virtue was originally a play by Noël Coward, but has been adapted twice; first as a silent film in 1928, directed by Alfred Hitchcock, and again in 2008, directed by Stephan Elliot. The 2008 version is the best known, and starred Jessica Biel, Ben Barnes, Colin Firth, and Kristin Scott Thomas.

The 2008 film contains examples of: