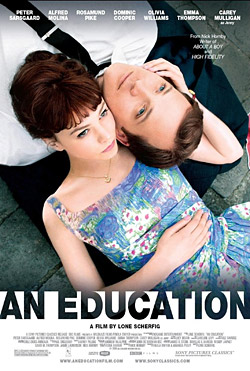 Sixteen-year-old Jenny (Carey Mulligan) is attending school, preparing for her A-levels and hoping to go to Oxford. One day, she meets an older man named David (Peter Sarsgaard), who charms her into a romance, distracting from her schoolwork. David introduces her to a whole new world out of her little suburb—a world of nightclubs, auctions for beautiful paintings, racing, and romance. Jenny soon has to make a choice between the academic world she's always prepared for—and the world of fun.

But little does she know how much David is hiding...