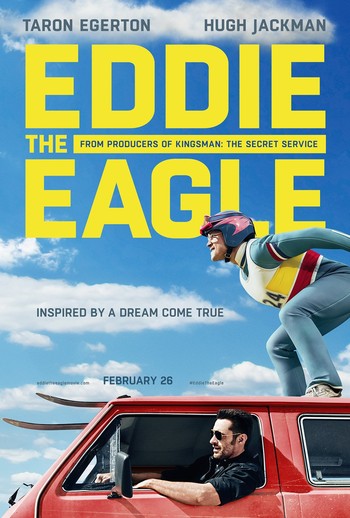 Eddie the Eagle is a comedy drama sports biopic released in 2016, directed by Dexter Fletcher and featuring a screenplay by Sean Macaulay and Simon Kelton. It stars Taron Egerton as Eddie "The Eagle" Edwards, Hugh Jackman as Bronson Peary, Christopher Walken as Warren Sharp, and Jo Hartley as Janette Edwards.

The film follows Edwards' life as he attempts to become an Olympic athlete, culminating in his participation in the 1988 Winter Olympics as the sole ski jumping applicant from Great Britain.

Eddie the Eagle contains examples of: