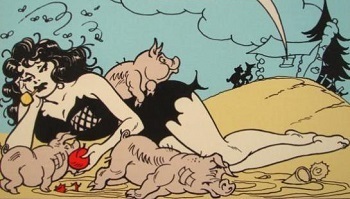 Gimme the girl that's beautiful
Without a trace of makeup on
Barefoot in the kitchen
Singin' her favorite song
— Joe Nichols, "Gimme That Girl"
Advertisement:

The fashion industry would have you believe that without make-up, expensive designer clothes, and fancy hair-care, all women look like trolls. Hollywood is all too willing to pass that message along. Some women, however, are always gorgeous, even without the aforementioned fashion accessories. In fact, sometimes they are even better-looking that way.

For men this trope has slightly more mainstream recognition, probably because personal grooming is frequently seen as unmanly. A Perma-Stubble helps contribute to the Hunk persona.

It may stem from the notion that a woman who puts a great deal of effort into fixing herself up on a daily basis could be seen as shallow and superficial, caring only about her looks. Make-up, hairstyling and carefully chosen clothes are instead seen as trying too hard, while rolling out the door in sweat pants, T-shirt and bedhead is more accessible.

This trope is the inversion of She Cleans Up Nicely, where a woman (or man) is just as appealing dressed down and casual as when they are trying to be fashionable. It can also be an audience's reaction to Hollywood Homely, in which case an attempt at She Cleans Up Nicely will likely be seen as an Unnecessary Makeover.

Be cautious about the application of this trope; Reality Is Unrealistic. An actor playing a role as a scruffy character may be genuinely trying to look bad, but even still it sometimes takes more effort to make someone look "natural."

A Sister Trope to Glasses Are Sexy, Meganekko, Ugly Cute and Nerds Are Sexy. Contrast with Curly Hair Is Ugly for a hair-specific variant.