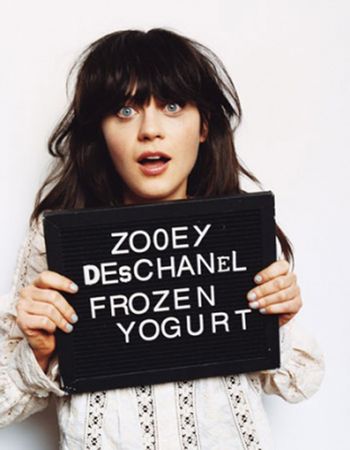 "Zooey Deschanel is as pretty as she is gifted in the stagecraft of both acting and singing. That's why her hair is so big: It's full of talent."
—Emma Jones, MSN Entertainment
Advertisement:

Zooey Claire Deschanel (born January 17, 1980) is an American actress, and if you're watching one of her performances, chances are she's either playing a Deadpan Snarker, a Manic Pixie Dream Girl, or both.

She's acted in such films as Mumford, Almost Famous, The Hitchhiker's Guide to the Galaxy, Elf, Tin Man, Failure to Launch, The Happening, Bridge to Terabithia, Yes-Man, (500) Days of Summer, and Our Idiot Brother. She also had a starring role in the Fox sitcom New Girl for seven seasons. In 2013 she guest starred in an episode of Fox's American Dad!, playing a parody of the types of characters she's usually typecast as.

In addition to acting, Deschanel is also a talented singer, songwriter and keyboardist, and is one half of the indie folk / indie pop (or as she once described it, "arena folk") duo She & Him (the other half being singer / guitarist / producer M. Ward), and a couple of her movies include at least one scene where she sings. She & Him have made six albums, one EP, and thirteen singles to date. Four of the albums charted in the Billboard 200 (one in the Top 10).

Her father Caleb is an award-winning cinematographer (best known for his work on such films as Being There and The Passion of the Christ), and her mother Mary Jo and sister Emily are both actresses as well, the former best known for playing Annie Glenn in The Right Stuff and the latter as Bones. (Zooey appeared as Bones' cousin in an episode of the latter.) She was married to Death Cab for Cutie lead singer/Face of the Band Ben Gibbard from 2009 until 2011. In 2015 she and her current boyfriend and fiancé, film producer Jacob Pechenik, announced they were expecting a baby together. The two got married before the birth of their daughter, Elsie Otter, in July. She gave birth to their son, named Charlie Wolf, in May 2017. Deschanel also converted to Judaism, Pechenik's religion. They have since divorced and as of 2021 Deschanel is dating Jonathan Scott of Property Brothers.

Discography (as part of She & Him)