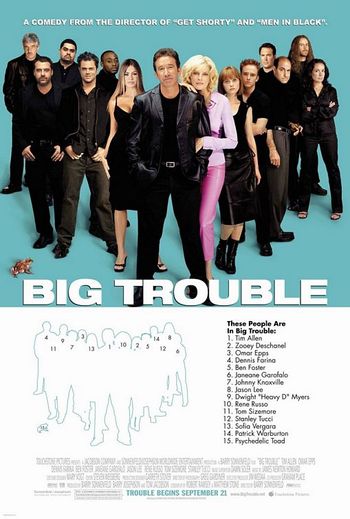 The diagram below shows you who's who.
Advertisement:

A 1999 novel by Dave Barry. Set in Miami, it satirizes the Crime and Punishment genre in fiction. While the novel starts out as a Slice of Life look into the daily business of various quirky characters, things soon take a turn for drama with the introduction of Russian arms dealers and a suitcase nuke.

The book was turned into a movie in 2001, but the release was delayed by almost a year because the September 11 attacks happened ten days before the original release date, and because of the film plot dealing with hoodlums hijacking a plane. The Film of the Book was directed by Barry Sonnenfeld and stars Tim Allen, Rene Russo, Stanley Tucci, Tom Sizemore, Johnny Knoxville, Dennis Farina, Janeane Garofalo, Patrick Warburton, Zooey Deschanel, and Ben Foster. Also features memorable appearances by Omar Epps, Jason Lee, and Andy Richter.

Not to be confused with the 1986 film of the same name directed by John Cassavetes and starring Alan Arkin and Peter Falk.