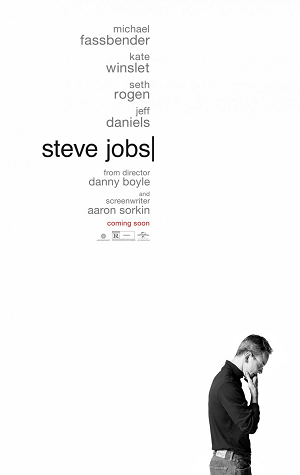 Can a great man be a good man?
Steve Wozniak: You cannot write code, you are not an engineer, you're not a designer... what do you do?
Steve Jobs: Musicians play the instruments. I play the orchestra.
Advertisement:

Steve Jobs is a 2015 drama directed by Danny Boyle, written by Aaron Sorkin, and starring Michael Fassbender, Kate Winslet, Seth Rogen, Jeff Daniels, and Katherine Waterston. Adapted from the 2011 biography of the same name by Walter Isaacson, the film has an explicit three-act structure that depicts three major events in the life of tech icon Steve Jobs (Fassbender):

Instead of focusing on the launches themselves, each of the acts takes place in the behind-the-scenes confusion right before each of these product unveilings. Through the acts, the film shows how Jobs' famously abrasive personality affected his co-workers and family, and focuses on his struggle to find his own humanity through his relationship with the daughter he had always denied was his.