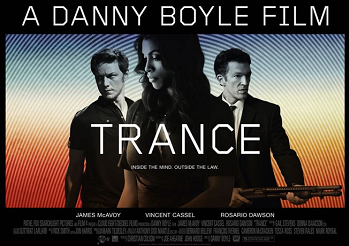 A 2013 British psychological thriller. It stars James McAvoy, Rosario Dawson and Vincent Cassel, and is directed by Danny Boyle.

Art auctioneer Simon becomes involved in the heist of a famous painting from his own auction house; but when the thieves find the painting they intended to steal missing from its frame, and circumstances leave Simon with Laser-Guided Amnesia, the thieves turn to hypnotist Elizabeth to help Simon uncover his memories of what he did with the painting.

Not to be confused with the musical genre.