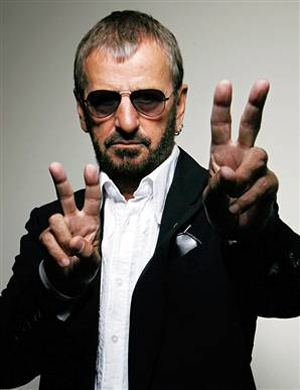 PEACE and LOVE!😎✌❤☮🌟🎶🥦🍒🐘
"To be or not to be, I don't care,
The question is, are you alive out there?
It don't take brains, just heart and soul,
I think therefore I rock and roll"
Advertisement:

Sir Richard Starkey MBE (born 7 July 1940), better known as Ringo Starr, was the more notable drummer for The Beatles, replacing Pete Best, and he is awesome. Following his career with the Fab Four, he has had a mildly successful solo career.

Aside from his musical career, he's also a pretty accomplished actor, having starred in such films as The Magic Christian (alongside Peter Sellers) and Caveman (where he met his wife, Barbara Bach), and has appeared in many other films over the years. He sang the theme song for a 2013 revival special of The Powerpuff Girls.

Some see him as the Beatles' Garfunkel, having only been credited for writing two Beatles songsnote "Don't Pass Me By" and "Octopus's Garden" out of the over 200 in their catalogue (although he does have several co-writing credits). Ringo himself has been Self Deprecating about this. The other Beatles tried to avoid this, however, by giving him at least one song to sing on most of their albumsnote A Hard Day's Night, Magical Mystery Tour, and Let It Be being the only exceptions, and have repeatedly declared his importance for the band in interviews. John Lennon, who often hired Ringo as his drummer after the break-up because he had gotten used to his groove, noted in an interview that "Ringo's a damn good drummer. He always was a good drummer. He's not technically good, but I think Ringo's drumming is underrated the same way as Paul's bass playing is underrated". In addition, Paul McCartney and George Harrison would often have him drum for their solo work as well.

Oh, and did we mention he provided narration for the first two seasons of Thomas & Friends, and also played the Conductor? As well as the first surviving Beatle to appear on The Simpsons in "Brush With Greatness"? Perhaps the most mind-boggling aspect of the former is that not only did he initially play the role of Mr. Conductor on Shining Time Station, but later got replaced by George Carlin of all people.

He's married to Barbara Bach, whom he met when they appeared together in Caveman.

An inductee in the 2015 Rock and Roll of Fame class, the final member of the Fab Four to be inducted as a solo artist. In December 2017, it was announced that he would receive a knighthood, which took place on March 20, 2018.

"How's that?"
"I GOT BLISTERS ON MY FINGERS!"
Feedback