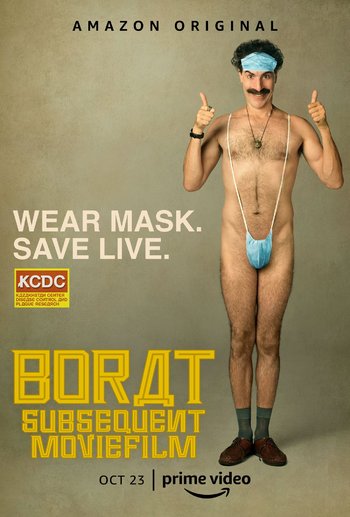 "Jigashamech! My name-a Borat! After 14 year, I have returned to US&A! Is nice!"
"Fourteen year ago, I release moviefilm which brought great shame to Kazakhstan. But now I was instruct to return to Yankeeland to carry out secret mission. I will give my daughter as a gift to someone close to the throne!"
— Borat Sagdiyev
Advertisement:

After the release of his eponymous film, Borat Sagdiyev was accused of humilating Kazakhstan with his movie, and he was sentenced to imprisonment in a gulag for life. Fourteen years later, however, the country's Premier, Nursultan Nazarbayev, offers him a pardon, provided that he completes a mission to deliver the Kazakh Minister of Culture, Johnny the Monkey, to US President Donald Trump in an attempt to redeem the nation.

Through a mix-up however, Borat ends up returning to the USA not in company of the monkey minister, but his estranged teenage daughter Tutar. Borat quickly reasons that his daughter would probably make for a better political gift anyway, and goes on a new journey through America in hopes of pawning her off to a member of Trump's administration. As he travels with Tutar, he reveals more about American culture, the COVID-19 Pandemic (one of the first mainstream films to directly address the subject), and the upcoming 2020 political elections. But Borat also discovers that he has become somewhat of a celebrity in the Land of the Free since the release of his first film, and so he decides to employ a wide variety of disguises to continue his mission unabated.

The film was released October 23, 2020 on Prime Video. In February 2021, it won the Golden Globe Award for Best Motion Picture — Musical or Comedy, which its predecessor had lost to Dreamgirls 14 years earlier. Borat: Subsequent Reportings Retrieved from Floor of Stable Containing Editing Machine, a followup miniseries made up of several specials largely featuring deleted scenes from the film, was released on May 25, again on Prime Video.

Tropes for Borat Subsequent Moviefilm include: