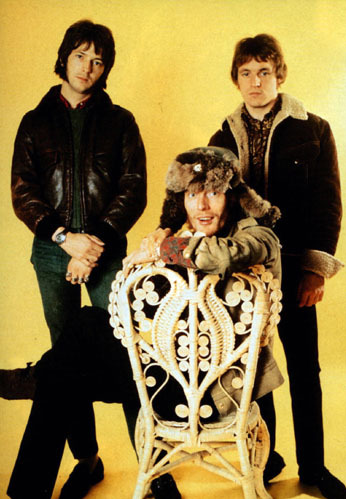 Left to right: Eric Clapton, Ginger Baker and Jack Bruce.
"Cream never really played that much blues. I think we aimed to start a revolution in musical thought. We set out to change the world, to upset people, and to shock them... Our aim was to get so far away from the original line that you're playing something that's never been heard before."
— Eric Clapton
Advertisement:

Cream was an extremely influential British rock band active from 1966 to 1969, reuniting a few times since. Cream was made up of Eric Clapton (guitar and vocals), Ginger Baker (drums), and Jack Bruce (lead vocals and bass). All three musicians were already well known in the English rock scene at the time, thus making Cream one of the first supergroups and the first to be referred as such. During their three years of existence, they released four albums, all of which reached the top 6 of the UK Albums Chart.

Cream basically popularised and helped codify Psychedelic Rock and brought Blues Rock into the mainstream with songs based on both traditional blues (such as "Crossroads" and "Spoonful") and modern blues. Cream also popularised the use of the wah-wah pedal.

The band was also known for its live performances. The members often incorporated jams into their songs, with some reaching to 16 minutes (such as "Spoonful" and "Toad"); this made them favourites around the world. They were at their time the number one biggest live act. Clapton's guitar solos were (and are) considered some of the best ever.

Fresh Cream, the band's first album, consisted of cover versions of blues standards ("Spoonful", "Rollin' and Tumblin'", "Four Until Late", "I'm So Glad"), original songs written by the band and collaborators ("I Feel Free", "N.S.U.", "Sleepy Time Time", "Dreaming", "Sweet Wine"), a rearrangement of the traditional song "Cat's Squirrel" and the drum solo showcase "Toad". Cream's sophomore effort Disraeli Gears is considered the album that defined the band's style of mixed rock and blues; some of Cream's biggest hits, such as "Sunshine of Your Love" and "Strange Brew," appeared on the album. Disraeli Gears is also noted for Martin Sharp's psychedelic cover art.

Wheels of Fire was Cream's third album and their first double album, the first disc with studio tracks and the second with live tracks performed in San Francisco. It topped the American charts and became the world's first platinum-selling double album. With this album, the band shifted from blues to Progressive Rock, using classical instruments and rare time signatures.

Shortly before Wheels of Fire was finished, the members of Cream wanted to go their separate ways. The already-present animosity between Ginger Baker and Jack Bruce reached a high point, and Clapton had to act as peacekeeper. Soon, all three members did not listen to each other much while performing, with Clapton frequently recalling a concert where he actually stopped playing at one point but neither Baker nor Bruce noticed. Clapton was also influenced to break up the band after a scathing review of one of their concerts in Rolling Stone, where Jon Landau dismissed him as a "master of the blues cliché", and after becoming captivated by The Band's debut Music From Big Pink. Cream made an official announcement in July 1968 that they would break up soon after another tour and album. The band did a farewell tour in late 1968, and their final album, Goodbye, was released in 1969.

Upon the demise of Cream, Eric Clapton had stints with several different bands before embarking on an extremely successful solo career; the other two members have been successful, but less so. The line-up reunited briefly at the Rock & Roll Hall of Fame in 1993 upon their induction and then again for a handful of reunion concerts in 2005. Jack Bruce died from liver disease on 25 October 2014, at the age of 71, which ended any chance of further Cream reunions. Ginger Baker died five years later, on 6 October 2019, aged 80, leaving Clapton the sole surviving member.

Cream's influence has extended far, from progressive rock bands such as Rush to jam bands such as The Grateful Dead to heavy metal bands such as Black Sabbath. VH1 and Rolling Stone have both called Cream one of the best bands of all time. Most of all, one of their number one fans was of course Jimi Hendrix, who came to England in hope of meeting Eric Clapton, his idol.